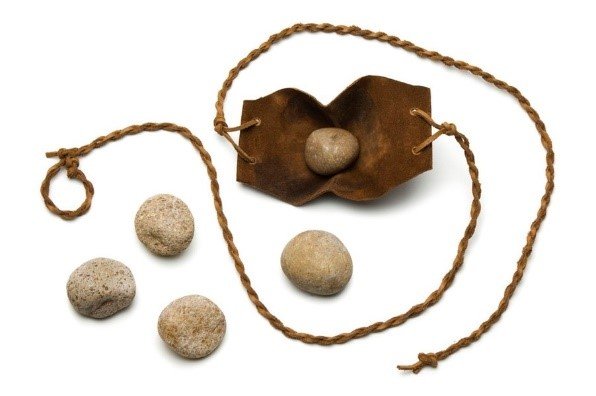 Sometimes You Have to Throw the Stone

I wrote the article below a little over a year ago, but thought it was worth revisiting, especially considering all that we are dealing with today. COVID-19, protest for racial justice, and the current political climate is enough to cause even the strongest amongst us to feel a little stressed. We tend to stress the most over things that are out of our control. This stress can cause us to worry to the point that we are mentally paralyzed and tend to do nothing to improve our situation. GOD did not create us to be creatures of fear. We must continue to do what is right in GOD’s sight and use His Word as our compass to go out and make a difference.

The title of this message may seem a little strange at first glance, but it has a story. As believers in our Heavenly Father and our savoir Jesus we know he can do all things according to HIS will. We know that he will fight our battles and we know through HIS Word that the final victory has already been won. But as we go through life there will be battles that we have to fight ourselves even though GOD is always with us…sometimes you still have to throw the stone.

In 1 Samuel, chapter 17, of the Old Testament of the Holy Bible, we read of the story of David and Goliath.

4 A champion named Goliath, who was from Gath, came out of the Philistine camp. His height was six cubits and a span.[a] 5 He had a bronze helmet on his head and wore a coat of scale armor of bronze weighing five thousand shekels[b]; 6 on his legs he wore bronze greaves, and a bronze javelin was slung on his back. 7 His spear shaft was like a weaver’s rod, and its iron point weighed six hundred shekels.[c] His shield bearer went ahead of him.

8 Goliath stood and shouted to the ranks of Israel, “Why do you come out and line up for battle? Am I not a Philistine, and are you not the servants of Saul? Choose a man and have him come down to me. 9 If he is able to fight and kill me, we will become your subjects; but if I overcome him and kill him, you will become our subjects and serve us.” 10 Then the Philistine said, “This day I defy the armies of Israel! Give me a man and let us fight each other.” 11 On hearing the Philistine’s words, Saul and all the Israelites were dismayed and terrified.”

As we see in verse 11 the Israelites were terrified, but we know GOD will send help to his people in their time of need. Many times, we may not recognize the help because it may not come in the form that we were expecting.

12 Now David was the son of an Ephrathite named Jesse, who was from Bethlehem in Judah. Jesse had eight sons, and in Saul’s time he was very old. 13 Jesse’s three oldest sons had followed Saul to the war: The firstborn was Eliab; the second, Abinadab; and the third, Shammah. 14 David was the youngest. The three oldest followed Saul, 15 but David went back and forth from Saul to tend his father’s sheep at Bethlehem.”

David saw what was happening and it did not sit-well with him that Goliath was defying the armies of the one true GOD.

26 David asked the men standing near him, “What will be done for the man who kills this Philistine and removes this disgrace from Israel? Who is this uncircumcised Philistine that he should defy the armies of the living God?”

28 When Eliab, David’s oldest brother, heard him speaking with the men, he burned with anger at him and asked, “Why have you come down here? And with whom did you leave those few sheep in the wilderness? I know how conceited you are and how wicked your heart is; you came down only to watch the battle.”

But when you know who you belong to and that GOD has your back, you can stand and speak boldly because of the things HE has brought you through. When people see your conviction then they have no choice but to get behind you.

32 David said to Saul, “Let no one lose heart on account of this Philistine; your servant will go and fight him.”

33 Saul replied, “You are not able to go out against this Philistine and fight him; you are only a young man, and he has been a warrior from his youth.”

34 But David said to Saul, “Your servant has been keeping his father’s sheep. When a lion or a bear came and carried off a sheep from the flock, 35 I went after it, struck it and rescued the sheep from its mouth. When it turned on me, I seized it by its hair, struck it and killed it. 36 Your servant has killed both the lion and the bear; this uncircumcised Philistine will be like one of them, because he has defied the armies of the living God. 37 The Lord who rescued me from the paw of the lion and the paw of the bear will rescue me from the hand of this Philistine.”

Saul said to David, “Go, and the Lord be with you.”

People who may not fully understand your situation, may try to provide assistance that is not beneficial. They can’t see that GOD has given you all the resources that you will need.

38 Then Saul dressed David in his own tunic. He put a coat of armor on him and a bronze helmet on his head. 39 David fastened on his sword over the tunic and tried walking around, because he was not used to them.

“I cannot go in these,” he said to Saul, “because I am not used to them.” So he took them off. 40 Then he took his staff in his hand, chose five smooth stones from the stream, put them in the pouch of his shepherd’s bag and, with his sling in his hand, approached the Philistine.

Never underestimate GOD’s People. They may look weak on the outside, but with the Spirit of the Lord in them, nothing is impossible.

41 Meanwhile, the Philistine, with his shield bearer in front of him, kept coming closer to David. 42 He looked David over and saw that he was little more than a boy, glowing with health and handsome, and he despised him. 43 He said to David, “Am I a dog, that you come at me with sticks?” And the Philistine cursed David by his gods. 44 “Come here,” he said, “and I’ll give your flesh to the birds and the wild animals!”

45 David said to the Philistine, “You come against me with sword and spear and javelin, but I come against you in the name of the Lord Almighty, the God of the armies of Israel, whom you have defied. 46 This day the Lord will deliver you into my hands, and I’ll strike you down and cut off your head. This very day I will give he carcasses of the Philistine army to the birds and the wild animals, and the whole world will know that there is a God in Israel. 47 All those gathered here will know that it is not by sword or spear that the Lord saves; for the battle is the Lord’s, and he will give all of you into our hands.”

David not only knew who he was, but he knew to Whom he belonged. When we understand the power that GOD has bestowed upon us then we can boldly confront any enemy.

48 As the Philistine moved closer to attack him, David ran quickly toward the battle line to meet him.

Notice as Goliath approach David didn’t back up he ran and faced the problem head on.

49 Reaching into his bag and taking out a stone, he slung it and struck the Philistine on the forehead. The stone sank into his forehead, and he fell face down on the ground.

51 David ran and stood over him. He took hold of the Philistine’s sword and drew it from the sheath. After he killed him, he cut off his head with the sword.

I love the story of David vs. Goliath. It demonstrates that when GOD is with you no one can stand against you. GOD will deliver your enemies into your hands; you just have to have Faith. The other important fact that I see in the story, is that GOD will provide you with resources and protection, but you may still have to throw the stone.

I heard people complaining all the time about their circumstances. They hate the way they are treated on the job, in relationships, or even by our political leadership. They make statements like GOD has me and this too shall pass. Now this is true, however there are times when GOD wants us to do something.

Who knows how long the Israelite Army would have waited before taking any action against the Philistines? Would they have just waited until they were attacked or until their supplies ran out? Like with the Israelites, fear will keep us in a place that GOD never intended for us to be.

GOD could have easily destroyed the Philistines, but he waited until one of his chosen had the courage to throw the stone.

Be the first to know about our latest updates, tips and special offers.